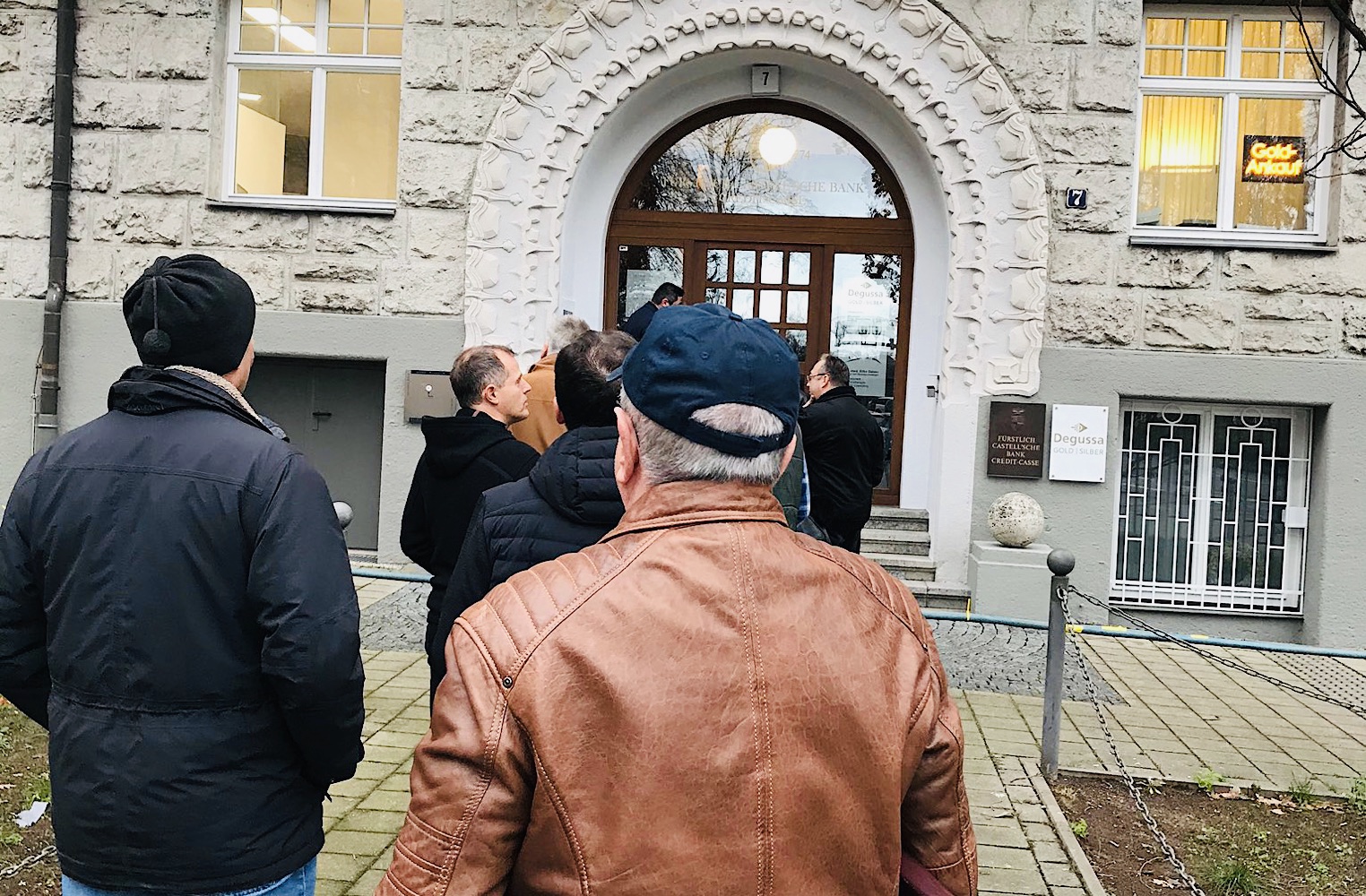 Reports have emerged depicting long lines in front of a physical gold sales location in Germany, in view of pending legislation which would once again lower the anonymous purchase limit, this time from €10,000 to €2,000. The last drop happened in 2017 when the limit was set at €15,000. A draft bill from the German finance ministry is being pointed to as the reason for the change, which is scheduled to take effect from Jan. 10, 2020.

Also Read: Someone Redeemed a 100 BTC Casascius Bar Worth Over $700K

In a tweet posted Wednesday, precious metals consultant and analyst Dan Popescu shared a picture of a long line of people waiting in front of “Degussa store to buy gold in Köln.” Popescu described, “From Jan. 1, 2020, the limit to buy gold anonymously drops from €10,000 down to €2,000. Only two years ago the limit was €15,000.” One user posted his own photo and replied “This is me line at Degussa in 23rd. The employees said they haven’t seen anything like it before.” To give an idea of the relatively small amount of gold €2,000 (~$2,224) can buy, even a 50g gold bar is currently too expensive.

After the new legislation takes effect, reports from German media state that purchases of the precious metal over €2,000 will now require customer identification for buyers, including criminal background checks for businesses. The news outlet details:

If a dealer suspects, he must report his potential customer to the authorities. If a trader fails to adequately comply with these obligations, he may face severe fines.

If given final approval, the German draft bill designed to implement EU guidelines as laid out in the anti-money laundering directive AMLD5, will take effect on Jan. 10. This is the stated deadline for member states to implement legislation accommodative of the directive. Residents of the country appear to be very concerned about the impending limitation, as the European Central Bank (ECB) continues to draw fire for its controversial economic polices such as negative interest rates. Also for newly installed ECB President Christine Lagarde’s recent criticism of perceived German conservatism. Skeptical reactions were voiced on Reddit as well, with one user stating:

They don’t want normal people to bank run their scam paper. Gold and hard assets is how you protect yourself from inflation. They want to know every single person that tries to get out of their cage.

The Far Reaching Arm of AMLD5

As news.Bitcoin.com previously reported, the 5th EU anti-money laundering directive has big implications for holders of crypto and crypto businesses. Its impending policies have already squeezed some out of the industry, at least temporarily, but crypto is far from the only area that will be affected.

Per the legislation, non-transparent assets, accounts, and even private safety deposit boxes will now be subject to state information gathering by law. Gold is a bastion for private value storage, so the stricter limits come as no surprise. AMLD5 focuses on combating the financing of terrorism (CFT) and preventing money laundering (AML), but given the state of economic affairs in the EU, skeptics maintain the new laws are part of a larger bid to establish financial control and force users to remain stuck in a faltering system. The fact that the ECB is now also in development of its own digital currency system amplifies these concerns, as one of the last remaining escapes from bank-imposed negative interest rates is to hold paper cash privately. With central bank digital currencies (CBDCs), negative rates can be applied directly to the asset, effectively closing this escape route.

Gold is thus seen as one of the final hedges against irresponsible government policy, and the proposed new limits on the precious metal will leave residents of Germany with even fewer options. The encroaching ECB and German policies have many on social media suggesting permissionless cryptocurrencies, which can be traded privately, as a means to hedge against the growing surveillance state.

What are your thoughts on the draft bill’s limitations for anonymous gold purchases in Germany? Let us know in the comments section below.