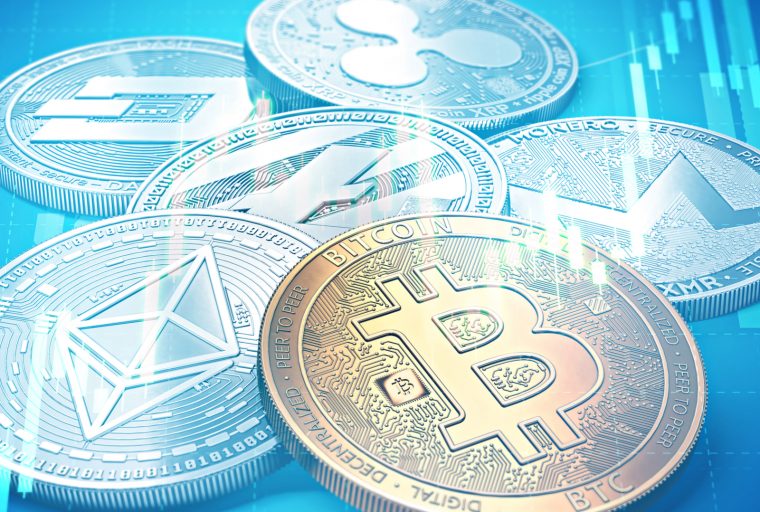 The cryptocurrency markets have enjoyed a strong week, with BTC, BCH, and many altcoins generating significant gains in recent days. There is considerable uniformity shared among major altcoin markets, with many cryptocurrencies recovering to test the 0.236% retracement areas after breaking above descending trendlines.

Whilst bitcoin (BTC) has made gains of 10%, this past week has seen Bitcoin Cash (BCH) perform with considerable strength, ramping up to gain nearly 50% against the dollar in just 7 days. Yesterday, the markets surged past resistance at $1,000 USD, breaking into the four-figure threshold for the first time since March. As of this writing, BCH appears to be consolidating above $1,000, with current prices sitting at roughly $1,080. 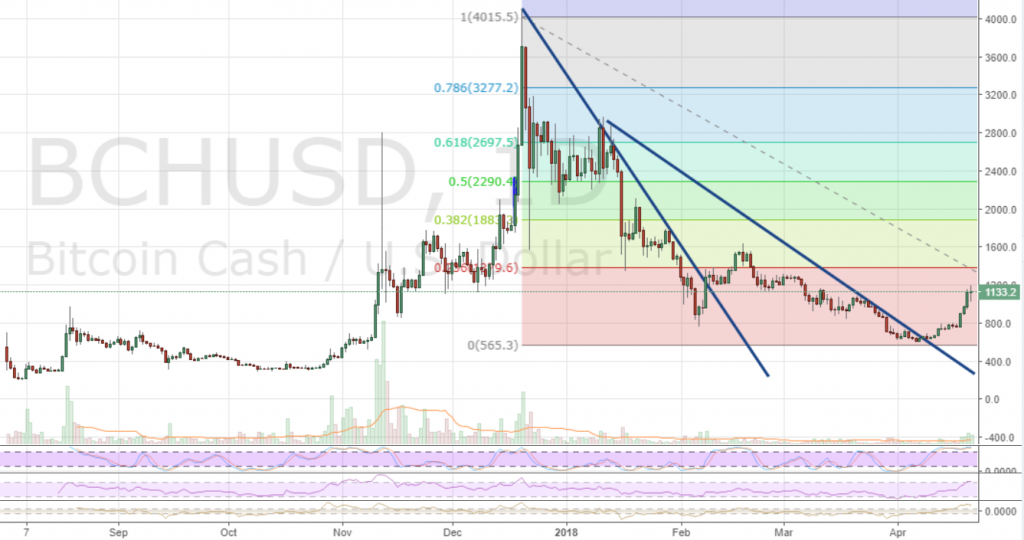 When measuring against BTC, BCH has gained 40% in a week – bouncing from a low of approximately 0.092 BTC to the current levels of roughly 0.13 BTC. When measuring from 2018’s high of 0.25BTC, BCH is currently consolidating at the 23.6% retracement area. Bitcoin Cash is currently the fourth largest cryptocurrency by market capitalization, with a total capitalization of approximately $18.5 billion according to Coinmarketcap. 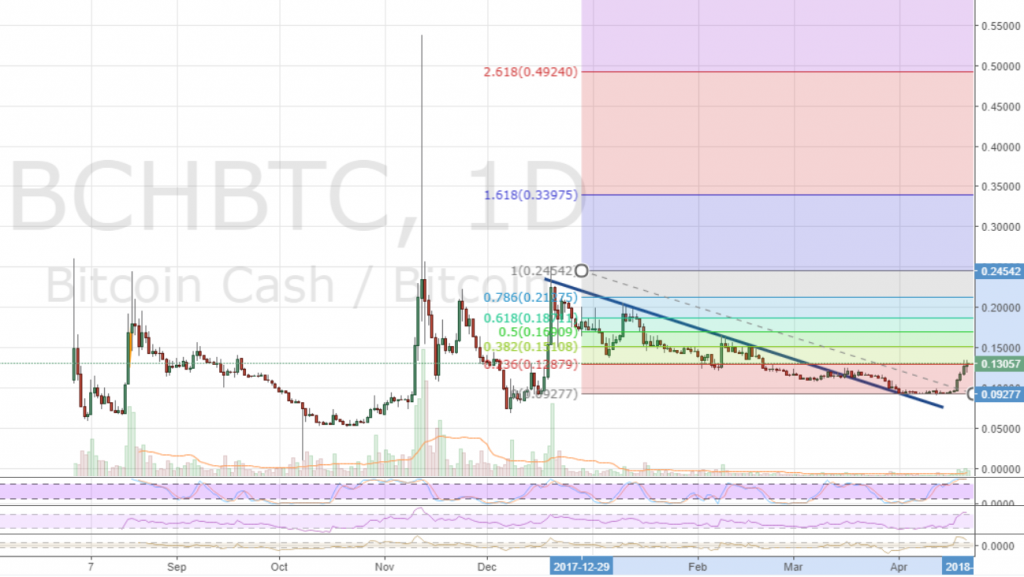 After months of sustained downward price action that saw many markets lose upwards of 80% – 85%, many altcoins have produced substantial gains over the course of recent weeks after breaking above major descending trend lines against both BTC and the dollar. Many markets are now testing their respective 0.236% retracement areas when measuring from 2018’s highs.

The second largest crypto by market cap, Ethereum, has made gains of approximately 60% over the last fortnight, rallying from the local low of approximately $370 USD during early April to test the $600 area in recent days. After a strong initial bounce, ETH has made consistent gains over the past week, gaining approximately 20% in the last 7 days. 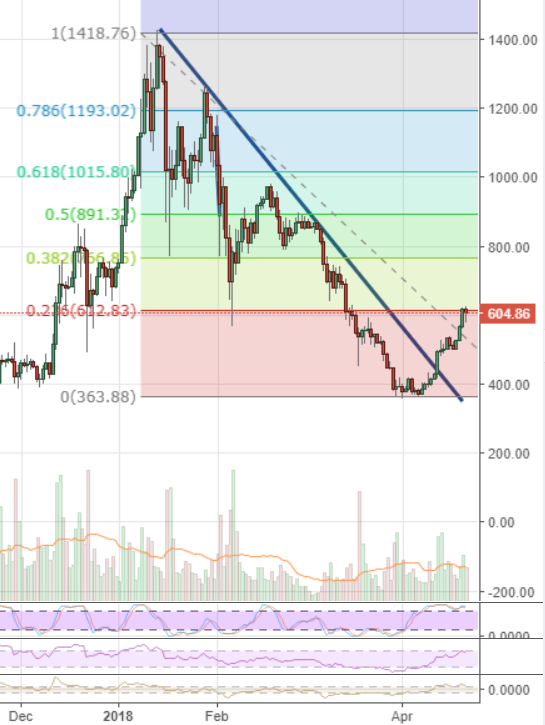 When analyzing the ETH/BTC charts, we can see that ETH has gained roughly 28% from April’s lows of approximately 0.054. As of this writing, ETH is testing the 0.236% retracement area of approximately 0.069 BTC and boasts a market capitalization of $59 billion. 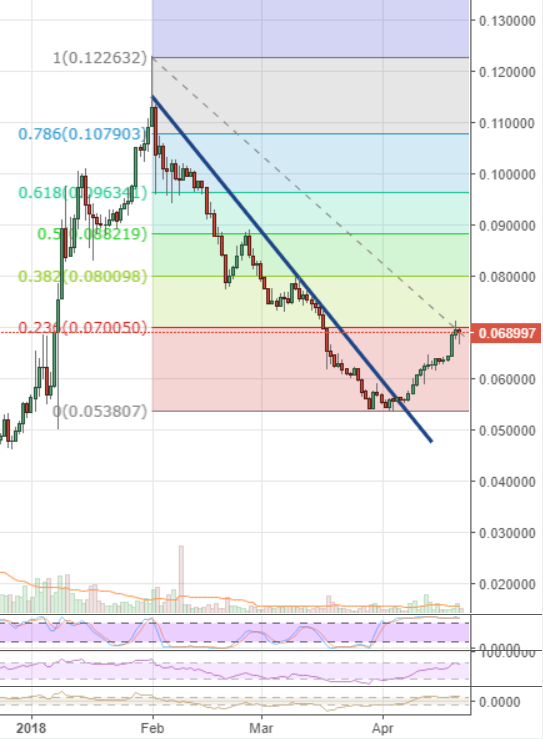 Ripple is currently the third largest cryptocurrency with a market capitalization of $33.25 billion. In the last two weeks, XRP has made significant gains of over 80%, rallying from a low of $0.45 to test resistance at the approximately $0.90 area. As of this writing, the price of XRP is roughly $0.86. 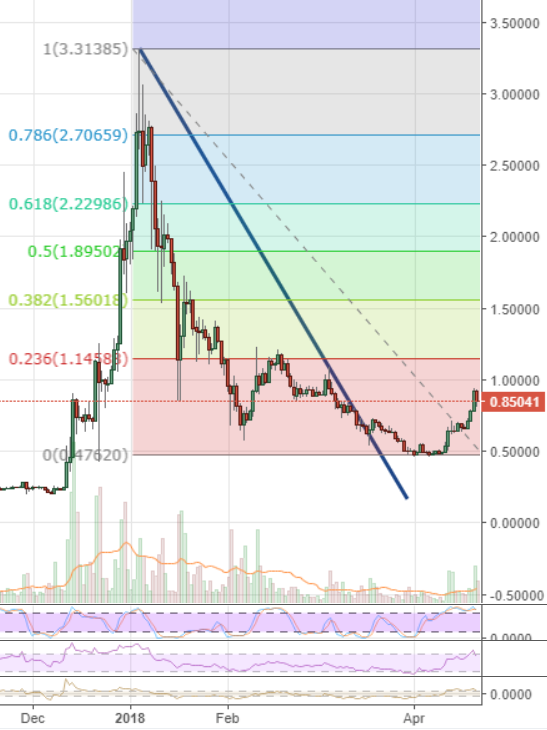 When measuring against BTC, XRP has bounced by approximately 40% since it’s April low of approximately 0.00007 BTC. As of this writing, XRP is consolidating just below the 0.236% retracement area of 0.0001, when measuring from Ripple’s early 2018 record highs. 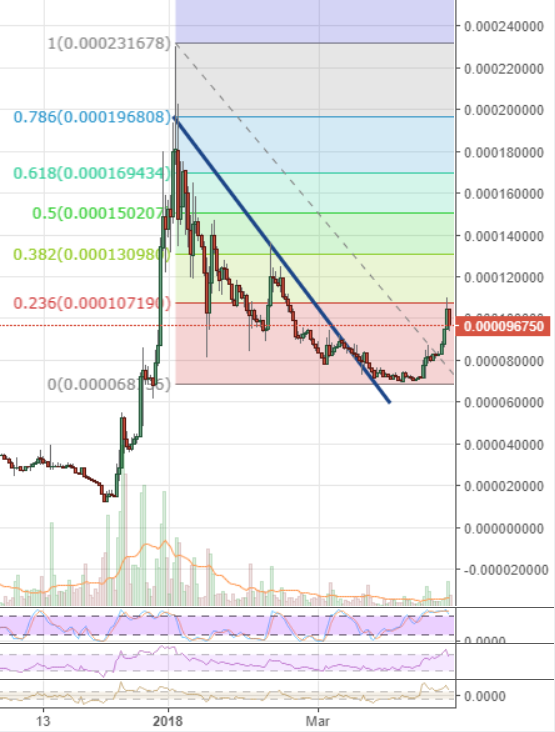 EOS and Litecoin have been vying for the position of the fifth largest crypto market, with EOS leading with a nearly $9 billion market capitalization as of this writing. EOS has gained almost 90% in just two weeks, quickly surging from below $6 to the current price levels of $11.15. When priced against BTC, EOS has gained over 45% in the last fortnight, with current prices at around 0.0012676 BTC, and is currently testing a key resistance area. 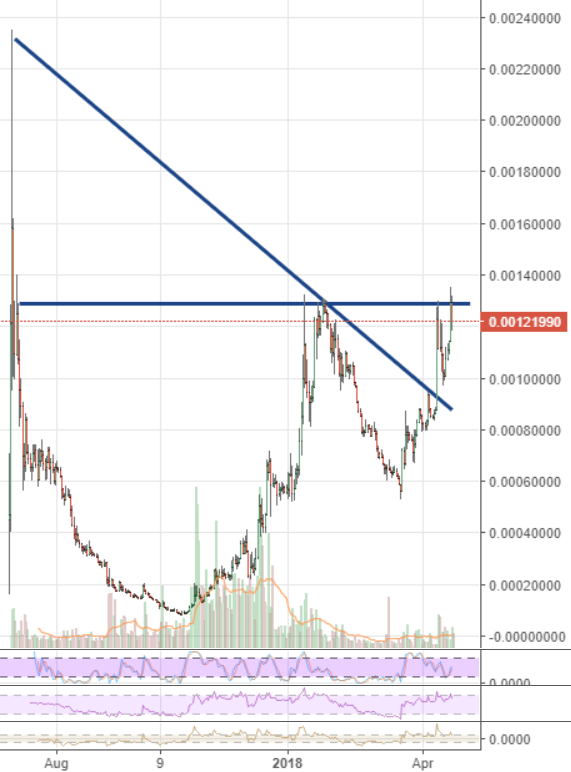 Litecoin is currently the sixth largest crypto market with a total capitalization roughly $8.4 billion. In the preceding fortnight, LTC has gained over 30%, bouncing from $115 to $150. Measuring against bitcoin, LTC has made modest gains of roughly 10% from it’s April low. As of this writing, the price of LTC is approximately 0.017 BTC. LTC is the least correlated of the major altcoin markets, having spent the majority of 2018 channeling within a 30% when paired against BTC. 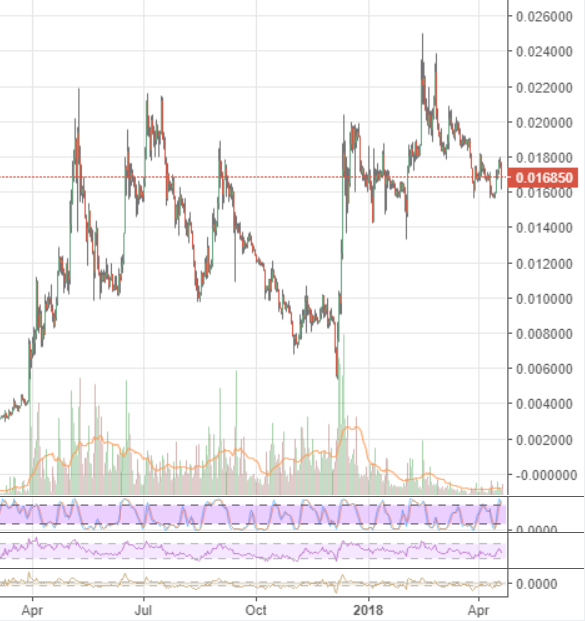 The price of Cardano has nearly doubled during April, with the ADA markets rallying from a low of $0.145 two weeks ago to now be testing resistance at $0.285. ADA has gained roughly 47.5% over BTC in the last fortnight, bouncing from roughly 0.00002200 BTC to the current prices of 0.00003250 BTC. Cardano is currently the seventh largest crypto market, boasting a market capitalization of $7.4 billion. 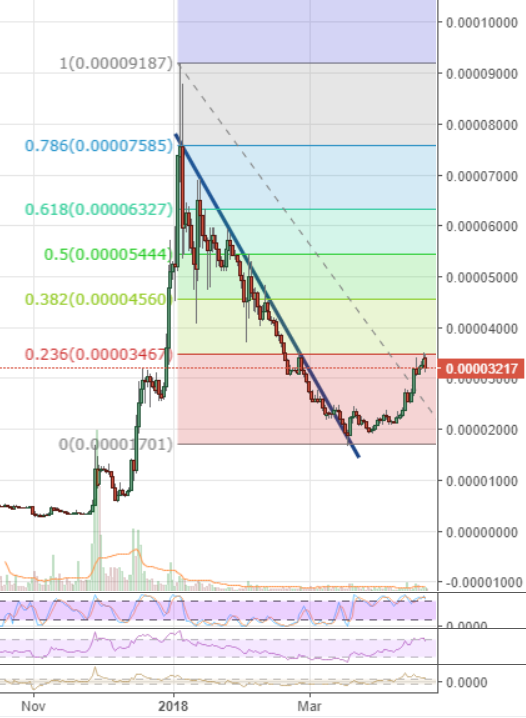 Stellar has also nearly doubled during April, surging from a low of $0.19 to test current levels at $0.37. When paired against bitcoin, Stellar has gained roughly 46.25% in two weeks, bouncing from 0.00002900 BTC to 0.00004250 BTC. Stellar is the eighth largest crypto market with a capitalization of $6.91 billion. Stellar rallied as high as the 0.618% retracement when measuring against BTC, and is now consolidating at the 0.5% retracement area. 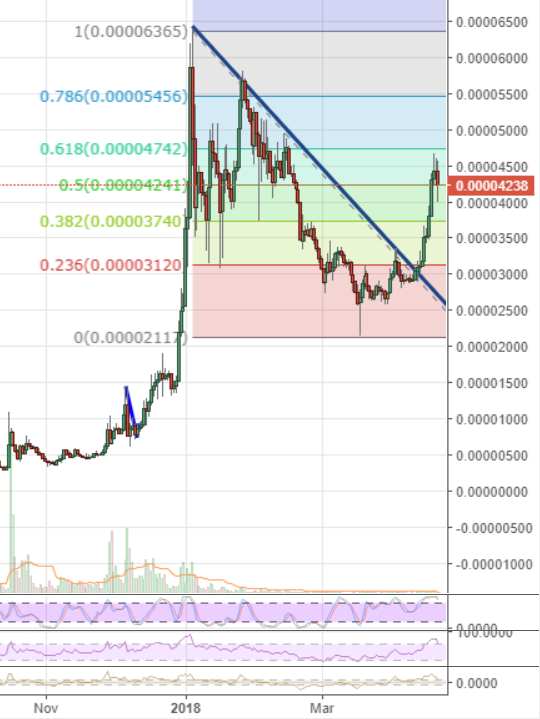 IOTA is currently the ninth largest crypto market with a capitalization of $5.25 billion. IOTA has doubled in two weeks, bouncing from $0.095 to the current levels price are of $1.89. IOTA has gained 49% over BTC in the last fortnight. 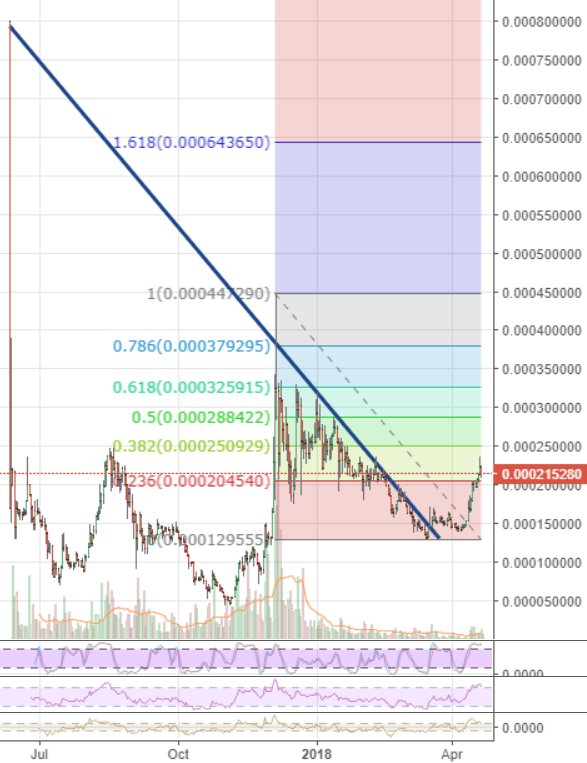 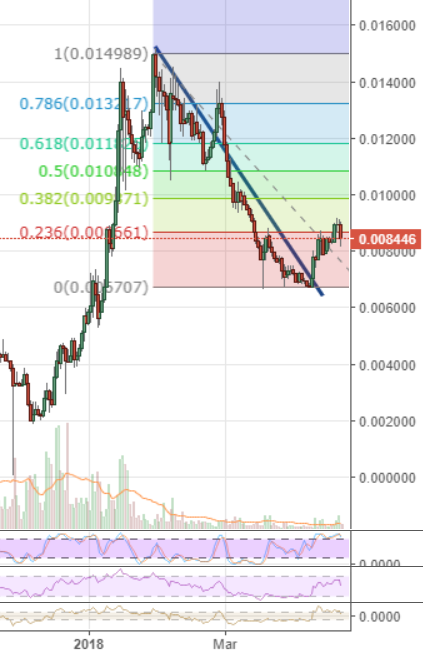 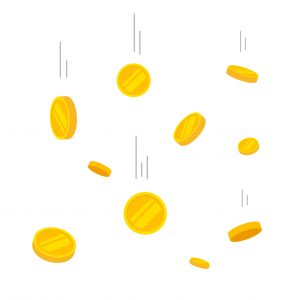 Although the cryptocurrency markets have produced impressive performance during April, whether or not the markets can sustain the bullish momentum in the medium term remains to be seen.

With so many altcoin markets breaking above descending triangles and rallying to test the 0.236% fibonacci retracement areas, many analysts are waiting for the markets to pull back and produce a higher low on larger time frame charts before proclaiming that the first altcoin season of 2018 is indeed kicking off.

Do you that the altcoin markets will continue to rally in the coming weeks, or are altcoins just experiencing a dead cat bounce? Share your thoughts in the comments section below!