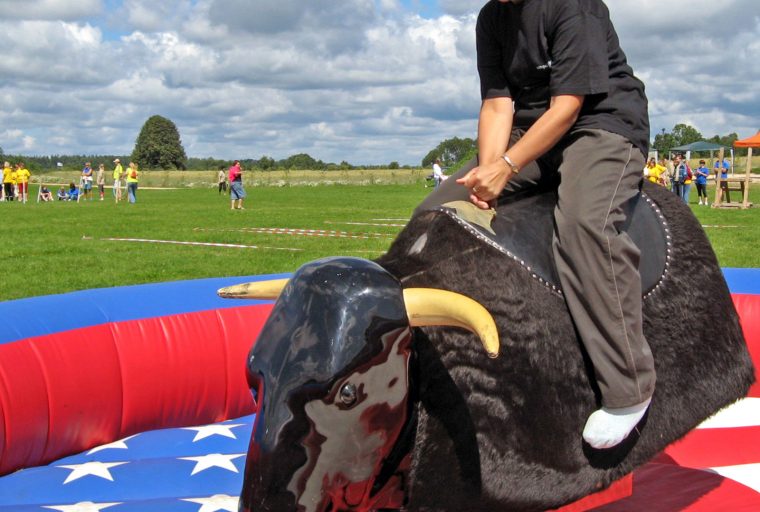 The BTC markets have rallied to test resistance at the $10,000 area. Despite gaining 60% in just four weeks, BTC’s recent gains have been significantly overshadowed by those produced by many top performing cryptocurrency markets, including Bitcoin Cash – which has gained more than 225% since it’s early April lows.

The price of BTC has continued to make consistent gains, bouncing by almost 60% from the recent low of roughly $6,400 to the current prices of $9,600. When measuring the bounce in relation to the bear trend of early-2018, we can see that the price of BTC appears to be trying to consolidate at the 0.236% retracement area. 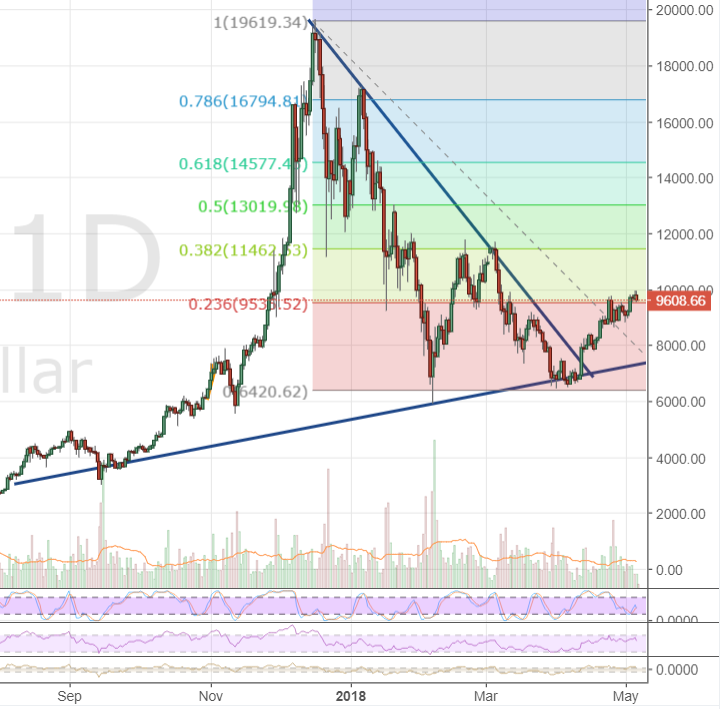 The recent price action has seen BTC break out of its large descending triangle formation, after establishing an additional point of contact with a long-term ascending triangle. The bounce has also driven the weekly stochastic RSI to break above the 20 threshold for the first time since July 2017. During April, BTC produced four consecutive green weekly candles for the first time since December 2017. This apparent shift in momentum has been interpreted by many as a signal that the recent recovery may not be over.

The bullish price action for bitcoin comes amid renewed interest among institutional investors, with Goldman Sachs indicating that they will launch bitcoin futures contracts in coming weeks, and the founder of Meitu, Cai Wensheng, announcing that he accumulated 10,000 bitcoins during the bear trend of early 2018.

Whilst longer-term price action appears to suggest more bullish momentum may be likely, immediate price action on the daily charts appears to be signaling that a retracement may be overdue.

When looking at the daily chart, the price of bitcoin fell below its immediate ascending trendline and has consolidated in a somewhat sideways trajectory in recent days. The recent price action which has seen resistance at $10,000 hold also appears to have produced a failed test of the underside of the aforementioned broken trendline.

Should the immediate ascending trendline on the 4-hourly chart fail to hold up, we may see a more significant retrace from current price levels. 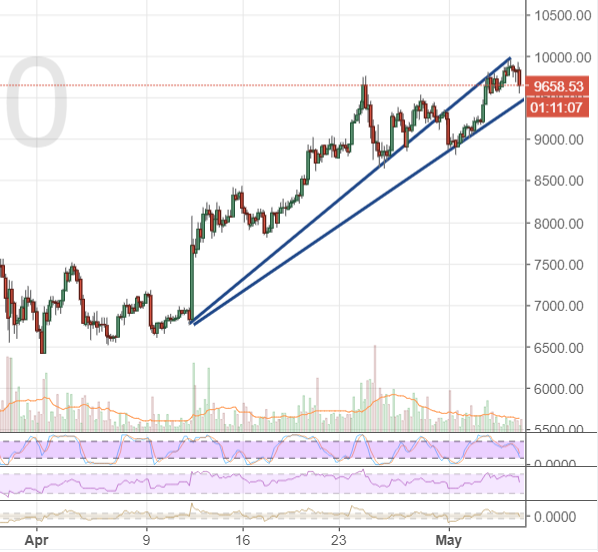 Despite the impressive performance of BTC during recent weeks, its gains have been dwarfed by those of many other markets, particularly Bitcoin Cash (BCH).

When measuring from the lows of early April, BCH has gained by over 225%. With prices currently hovering at approximately $1700’s, BCH has made gains of roughly 14.5% in the last 24 hours alone – making Bitcoin Cash the strongest gaining market of the 60 largest cryptocurrencies by market capitalization. 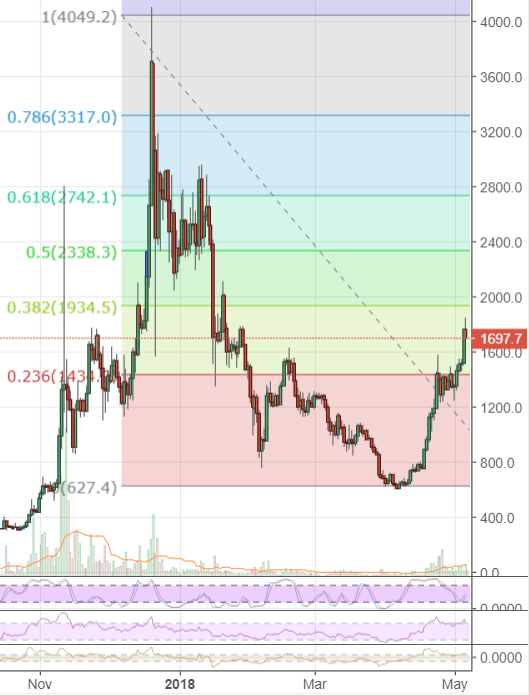 When measuring the bounce in relation to Bitcoin Cash’s almost 85% drop from its all-time high of $4,000, BCH appears to be gearing up for a test of the 0.382% fibonacci retracement area of approximately $2,000. 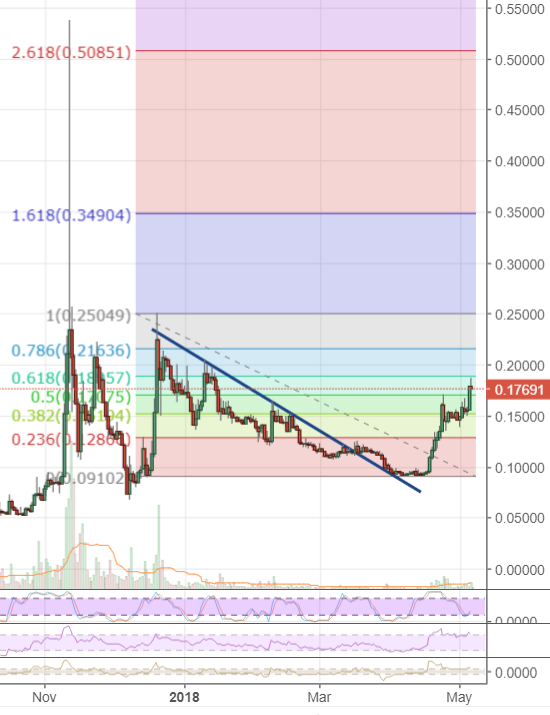 Ethereum has also made impressive gains during the last month, increasing in value by almost 150% from its early-April low. Ethereum’s market cap has retained a strong lead over all other alternative cryptocurrency markets – currently at over $82 billion. As of this writing, the price of ETH is approximately $780. 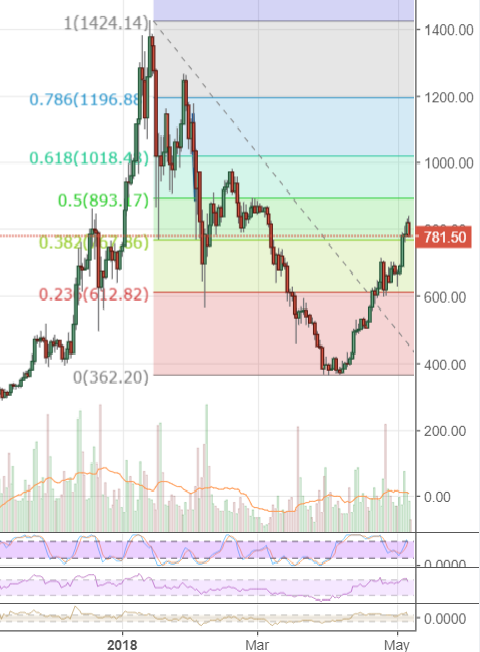 After testing support at the low $300’s, ETH has since made a robust recovery – with the current price of roughly $825 sitting between the 0.326% and the 0.5% fibonacci retracement areas.

When paired against BTC, one can identify the early-April low of roughly 0.05 as comprising the establishment of support at the approximately 0.236% retracement area. When measuring the crash from the June 2017 all-time high of approximately 0.15 BTC to the mid-July low of 0.025, the current prices of 0.081 appear to be approaching a test of the 0.5% fibonacci retracement area. When measuring from the 2017 high of roughly 0.12 to early-April low, current prices appear to be sitting just above the 0.326% retracement area. 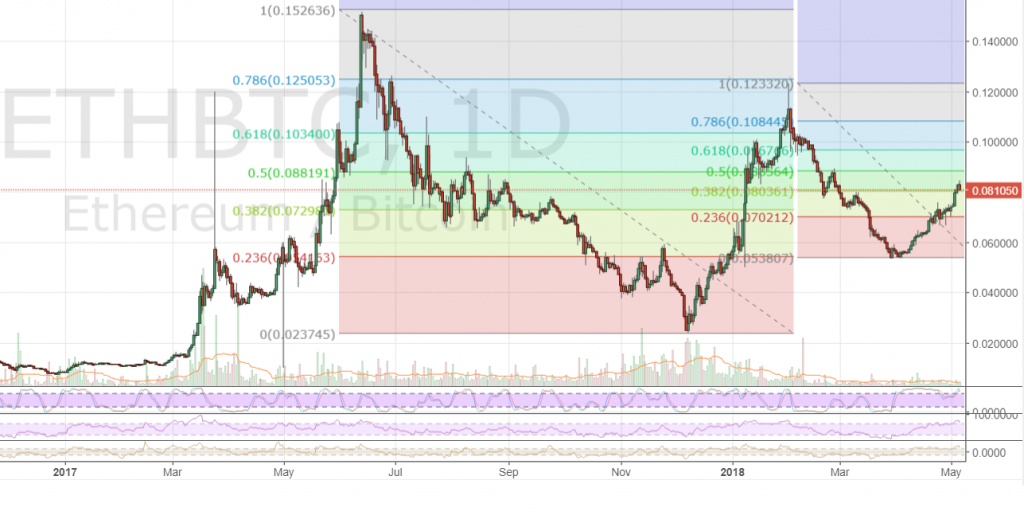 Eos Among Highest Gaining of Top Cryptocurrencies by Market Cap

Eos has rallied to produce among the highest gains of all leading cryptocurrency markets in recent months. During mid-March, Eos produced a 75% bounce off its local low of roughly $4 to test resistance at $7 in under a week. Moving into April, the price of Eos consolidated around the $6 area, before making steady gains through the month to break into new all-time highs at the end of April. After establishing new record highs above $22, Eos has since retraced 25%, with prices currently hovering at roughly $16.60. At current prices, Eos has produced gains of over 175% since the April breakout, and over 300% since the March low of roughly $4. When running a fibonacci extension from the October 2017, to January 2018’s now-former record highs, and back to the local low of March 2018, we can see that the Eos markets have retraced from the 1.0% extension. 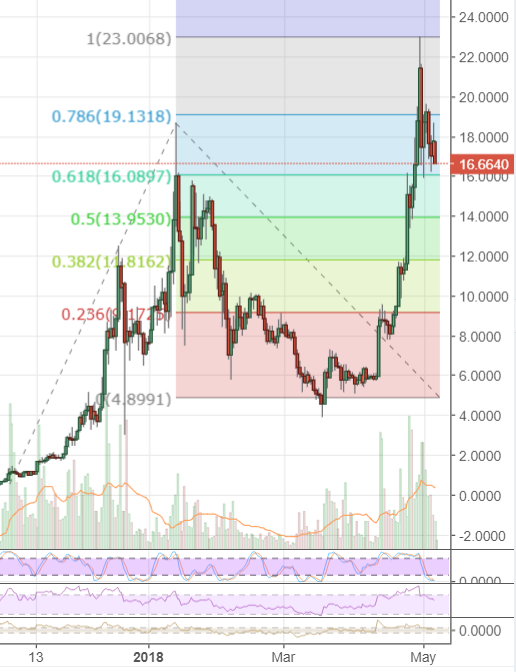 According to coinmarketcap, Eos is now the 5th largest cryptocurrency by market capitalization – boasting a total capitalization of over $14.5 billion.

Other Leading Markets Gain Over 100% In Four Weeks

Cardano currently boasts a market capitalization of nearly $9.5 billion, after having bounced nearly 150% from an early-April low of approximately $0.145 to currently trade for nearly $0.36. When measuring from Cardano’s all-time high of almost $1.40, the ADA markets are sitting just below the 0.236% retracement area – indicating the potential for further upside momentum, despite the considerable gains already made. 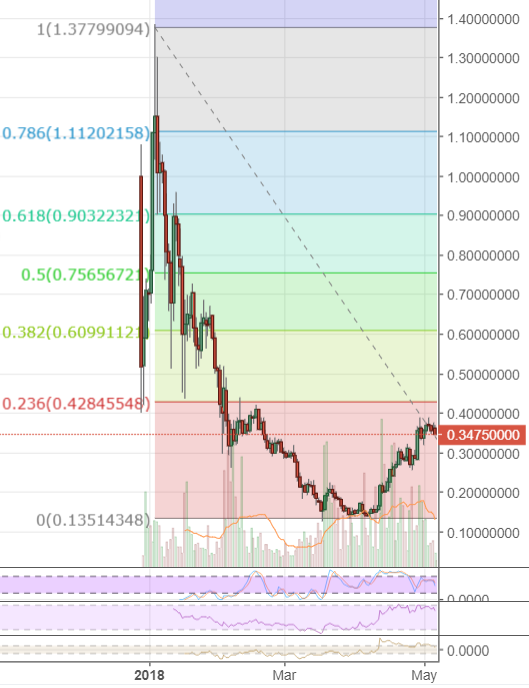 Stellar has produced an approximately 125% bounce from its early-April low of just below $0.19, with current prices trading at almost $0.43. Stellar appears to be making a small consolidatory retrace after rallying to test resistance at the 0.326% retracement area. As of this writing, Stellar’s market capitalization is almost $8 billion. 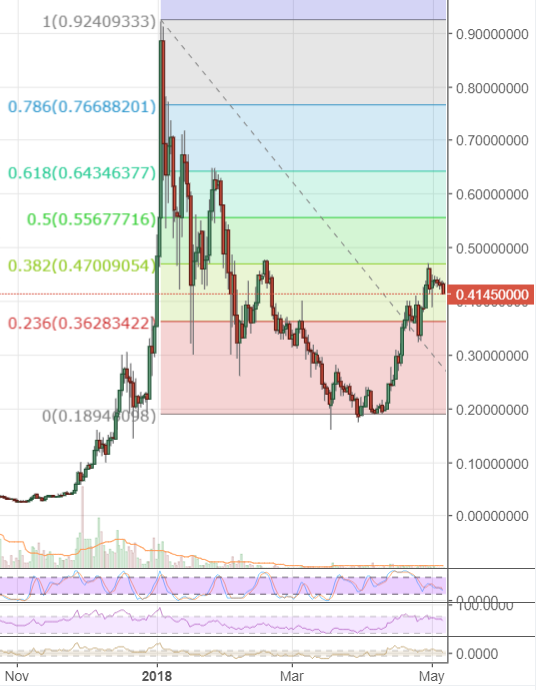 Iota has gained 150% this past month, bouncing from a local low of just below $1 – with prices currently trading at approximately $2.50. When measuring from Iota’s all-time high of over $5.50, IOT is currently making a small retrace from the 0.326% retracement area. The market capitalization of Iota is almost $7 billion. 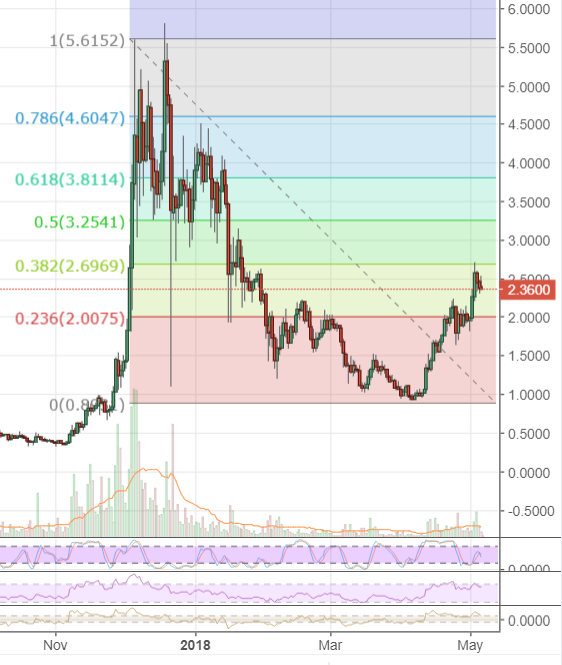 Do you think the cryptocurrency markets are overdue for a correction? Share your thoughts in the comments section below!