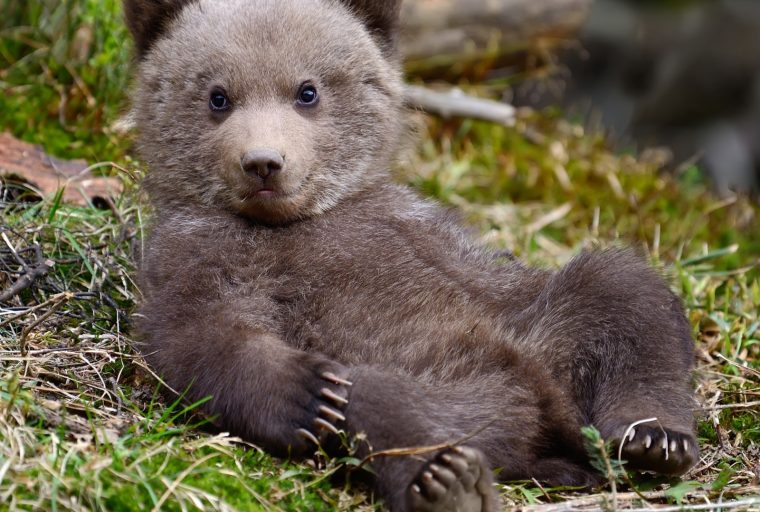 The bullish action witnessed by the cryptocurrency markets last week has seen many leading markets break above the bearish descending channels which have guided price action in recent weeks. The last couple of days has seen the many markets retrace – with many traders closely watching to see if the markets can hold up and confirm the formation of a higher low, or if they will wash out to produce more bearish momentum.

The BTC markets recently posted a green weekly candle for the first time in the last four weeks – signaling for the potential for bitcoin to produce a second consecutive higher low since February’s washout down to $6,000 USD. Should support at approximately $7,000 successfully hold, many traders are predicting that more bullish momentum may be in store the BTC markets. Transversely, a break-down from the current price area to retest $6,000 would also comprise the rejection of the long-term ascending trendline dated from July 2017. Should this trendline break, such would likely comprise the catalyst for further bearish price action across the cryptocurrency markets. 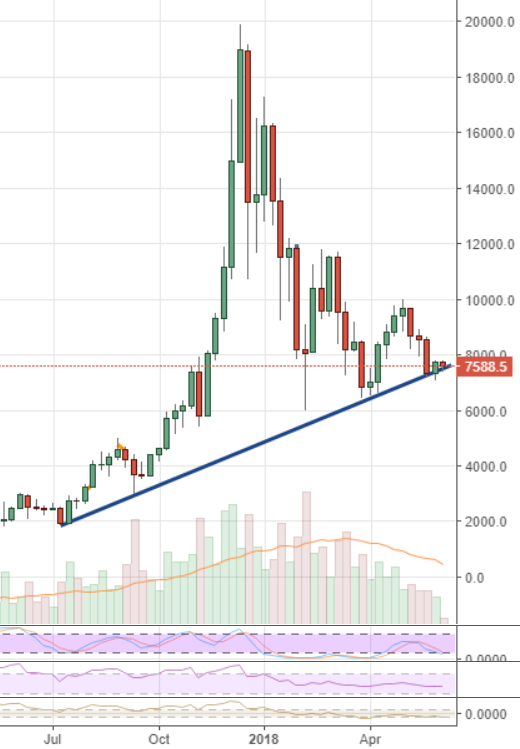 Looking at BTC on the 4-hour chart, one can see that it has broken above the immediate descending bear-channel in which the markets have trended for several weeks, as with many other cryptocurrency markets. If BTC can stay outside of said channel, such may be a signal for coming upward price action.

As of this writing, BTC is trading for approximately $7,600 and exerts a market dominance of 37.7%. The market capitalization of the bitcoin markets is $130.2 billion.

BCH/USD has also broken out the bear channel in which price action has trend since early May after gaining approximately 15% since the start of June. If prices are able to hold up, BCH will have produced its first higher low for 2018 – potentially comprising the first signal that Bitcoin Cash may be exiting the bear trend that has dominated market action throughout 2018. 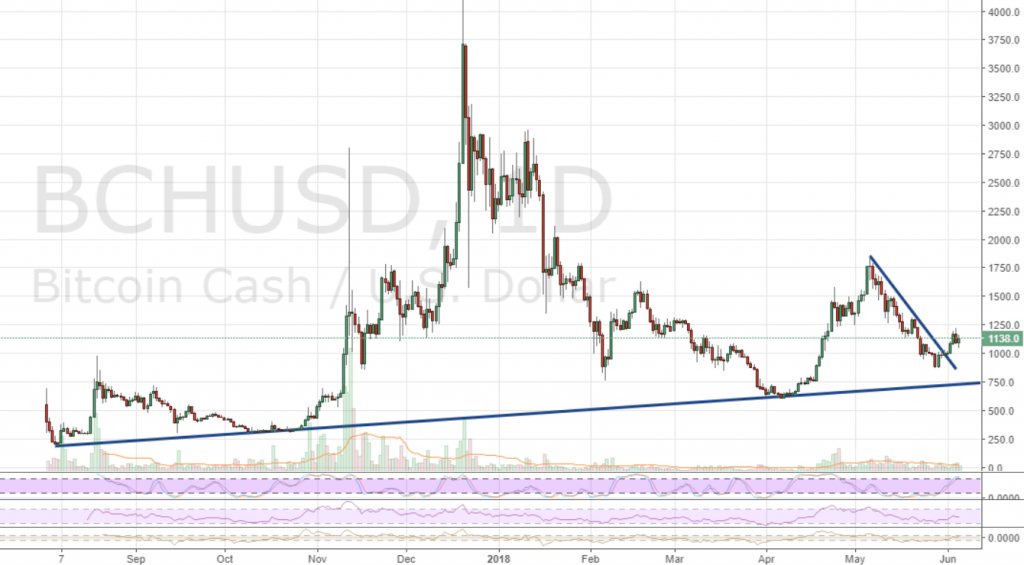 The BCH/BTC markets have also broken above a bear-channel, with Bitcoin Cash gaining over BTC by approximately 10% in the last week. 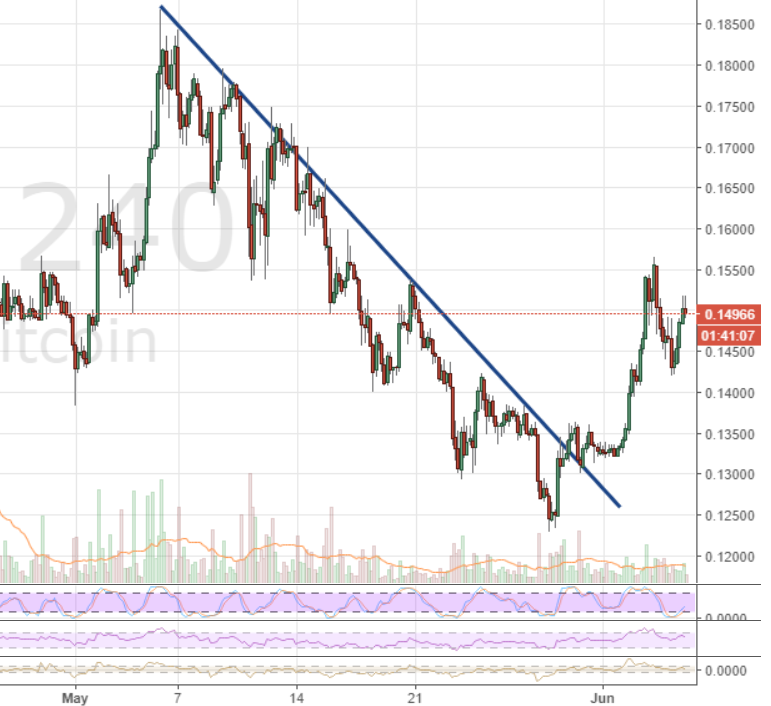 As of this writing, BCH is trading for approximately $1,150 USD, or 0.15 BTC, with BCH comprising roughly 5.7% of the total capitalization of all crypto markets combined. Bitcoin Cash is the fourth largest crypto market by capitalization with a market cap of nearly $19.8 billion.

As of this writing, ETH appears to have bounced off an ascending trendline for the second time since in 2018 that dates back to December, after ETH gained approximately 10% during the last weekend over bitcoin. Whilst ETH/BTC currently appears to be forming one of several potential symmetrical triangles, a break of the immediate ascending trendline could lead to a significant breakdown relative to BTC. ETH is trading for 0.0777 BTC as of this writing. 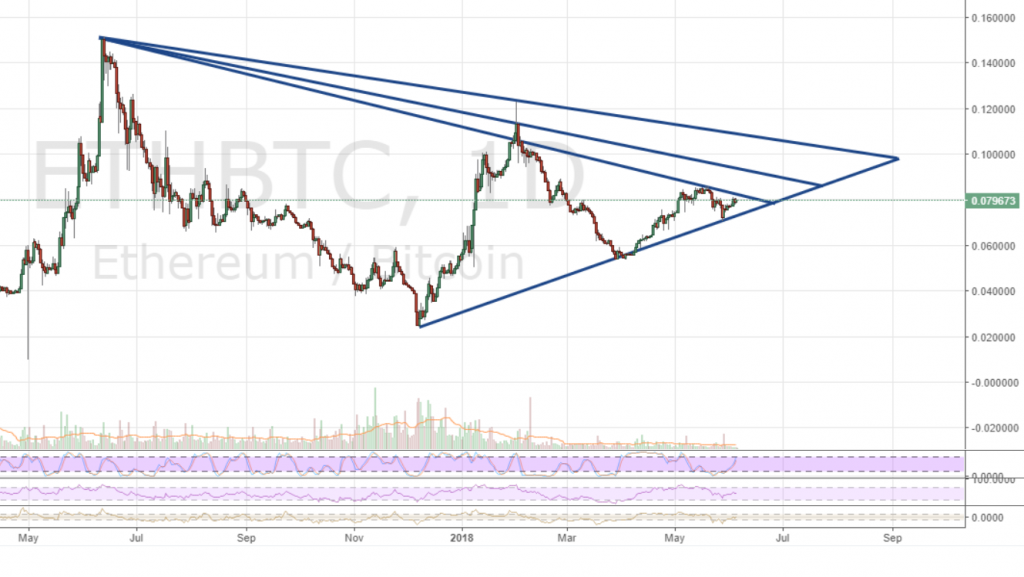 When paired against USD, ETH has gained roughly 17% in the last week – bouncing from a recent low of approximately $520 to currently be trading for nearly $610. Looking at the daily chart, the ETH/USD markets appear to be creating a new price channel above the long-term ascending trendline from early 2017, and outside of the descending trendline that drove price action from January until early-April. 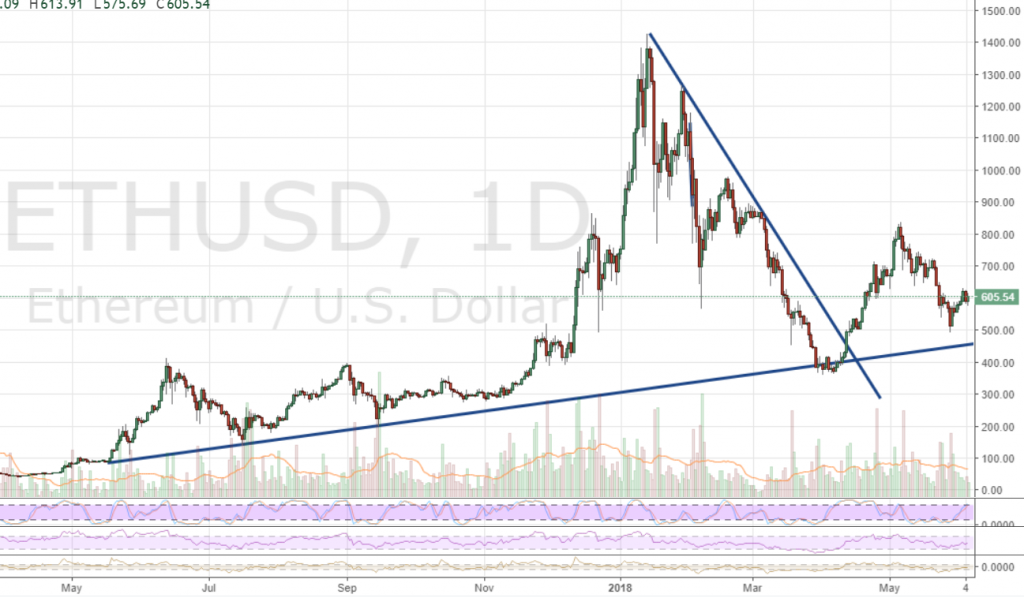 Looking at immediate price action on a 4-hour chart, ETH appears to have just crept above last month’s bear-channel, however, a break-out above the descending trendline is still far from confirmed as of this writing. 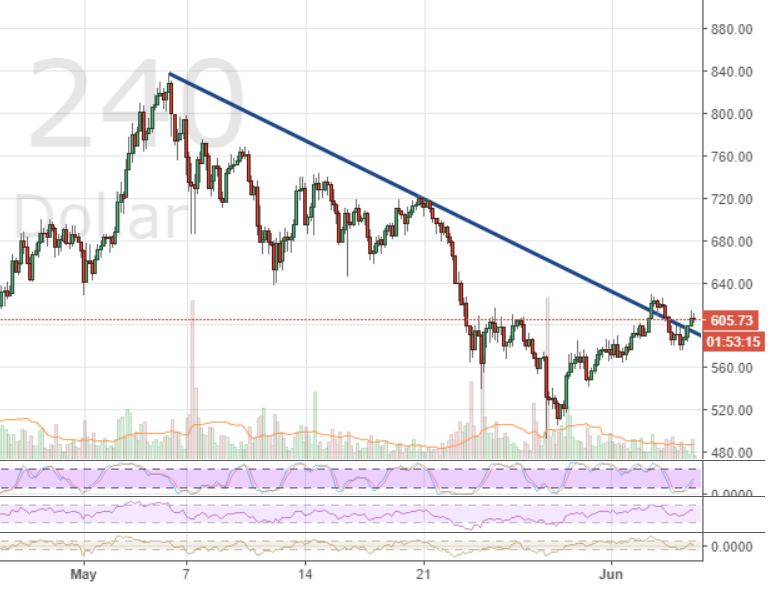 The market dominance of Ethereum is approximately 17.6% as of this writing. The market capitalization of ETH is nearly $60.9 billion.

Other Leading Markets Bounce Above Bear-Channels

The third largest crypto market by capitalization, Ripple has gained approximately 11.5% over USD this week, rallying from approximately $0.605 to $0.676. 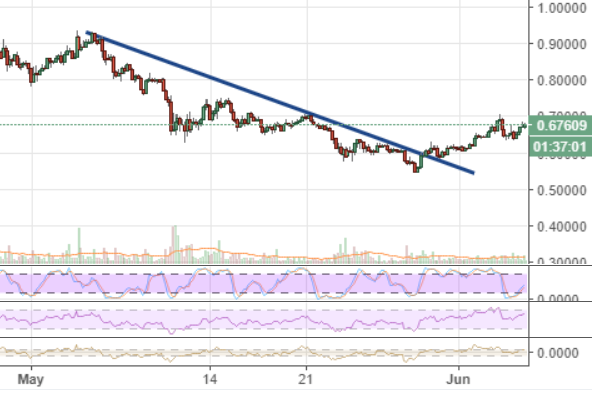 When measuring against BTC, XRP has gained roughly 10% in the last 7 days and is currently trading for 8915 satoshis after having broken above last month’s bear-channel. Ripple has a market capitalization of $26.67 billion.

EOS has produced a significant bounce in recent days, gaining around over 16% from the last month’s low of roughly $12.15 and breaking above May’s descending channel. EOS/USD currently appears to have bounced off support at the previous all-time-high area from 2017 of approximately $14. When compared with BTC, EOS gained approximately 12% from $0.00165 to $0.00185. 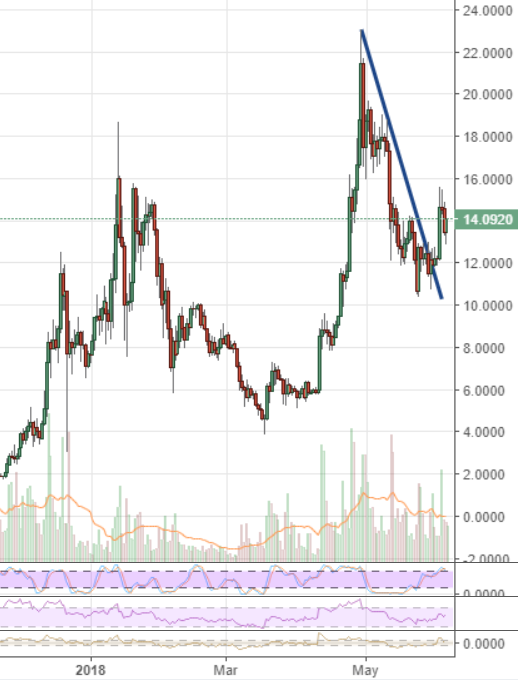 EOS is currently the fifth largest cryptocurrency by market cap with $12.67 billion.

Do you think that the markets are forming a higher low? Or a dead cat bounce before more downward price action? Share your thoughts in the comments section below!