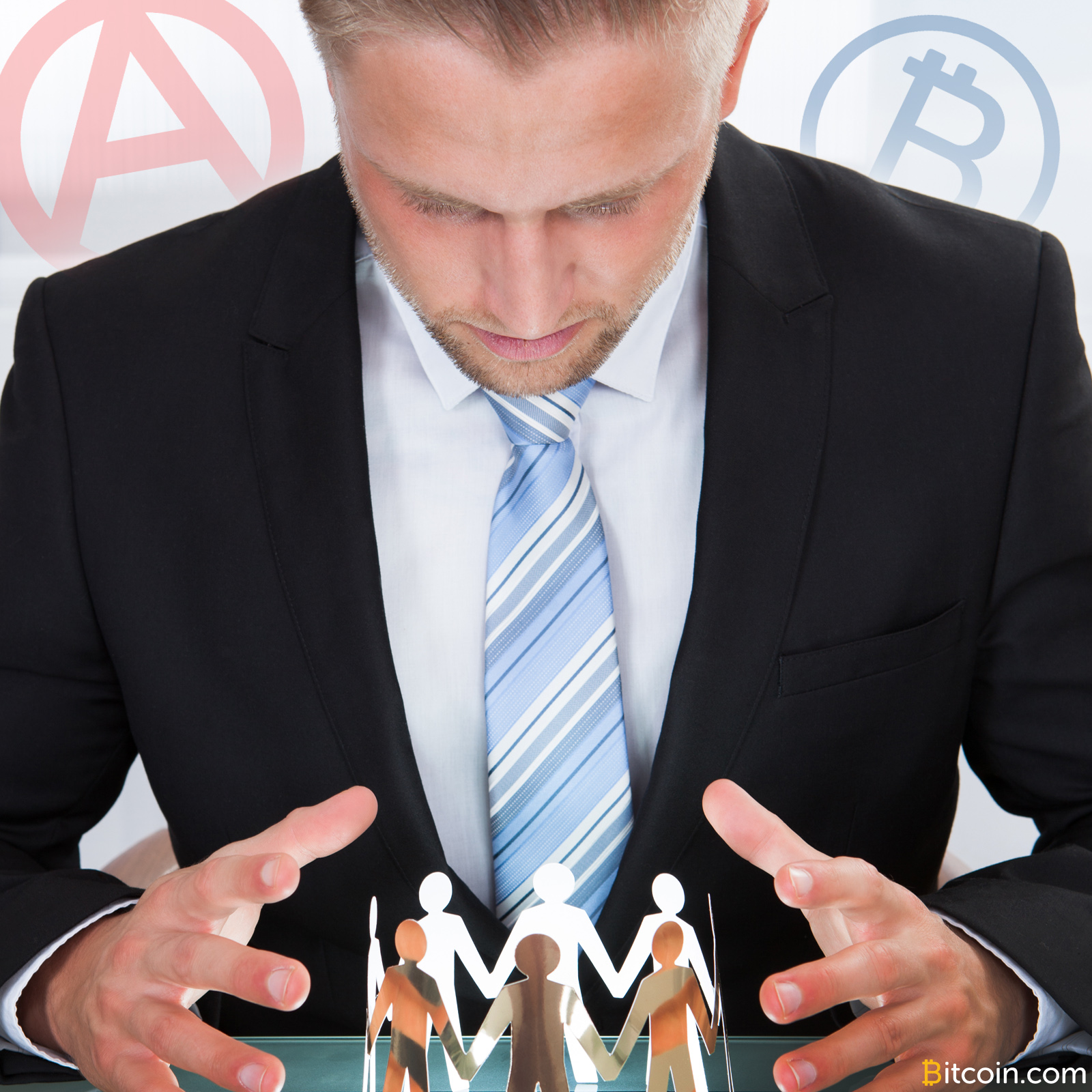 “Antagonism between the classes will be removed. I do not envisage a dead and artificial level among the people. There will be a variety among them as there is among the leaves of a tree. There will certainly be no have-nots, no unemployment, and no disparity between classes and masses such as we see to-day. I have no doubt whatsoever that if non-violence in its full measure becomes the policy of the State, we shall reach essential equality without strife.”

Cryptocurrency is the realization of an anarchist dream that dates back centuries:  a free currency and a free banking system. Crypto is in its infancy, which means  its future applications are electrifyingly unpredictable, except in one regard: any successful application will fill a human need. No human needs are as acute as food and shelter, which require money and exchange. To control the flow of money and exchange, therefore, is to control life itself. And the financial flow is often captured by one word: banking.

In their quest for free banking, social reformers of the past made a distinction that is often lost today. Namely, banking is at the core of class warfare. The ramifications of that insight rests upon the definition of “class” being used: capitalist v. worker, nobles v. peasants, the political v. the productive. Crypto departs sharply from the meaning imposed by socialists centuries ago–capitalists v. workers–and expresses a 21st century form of financial class warfare: the political v. the productive.

The extraordinary crypto network is not a banking system, as traditionally conceived, but it can replace most banking functions. And future evolution within crypto applications may wipe out any remaining need for central banks.

19th century anarchists knew that freedom hinged upon what French radical Pierre Joseph Proudhon called a Bank of the People—a bank that served the financial interests of workers, not of the elite. Proudhon’s vision was a cooperative bank that provided low-interest credit and which issued notes based on labor instead of money based on gold.

The many attempts at free banking usually had a theme in common; they failed. Three factors played a significant role.

Ideology. Early anarchists accepted the socialist concept of a “Labor Theory of Value.” That is, the just economic price of a good or service is determined by the labor needed to produce it. The theory forms the linchpin of socialism’s condemnation of “the capitalist,” who steals the wealth earned by “the worker” when he charges and pockets more than the cost of production for a good. In short, socialists believe embedded labor, not subjective value or supply and demand, determine a just price. Banking experiments of the past tended to stumble and fall over this deeply flawed economic model. Not until Murray Rothbard fused individualist anarchism with Austrian economics, and popularized them both, did free-market anarchism emerge.

Structure. Many alternate institutions depended on the system against which they rebelled. Proudhon’s proposed Exchange Bank, which was intended to be an umbrella structure for smaller Banks of the People, is an example. The Exchange was meant to replace France’s central bank and to obsolete the financiers who preyed on workers. In his periodical Liberty, the iconic 19th century American anarchist Benjamin Tucker explained, “The Bank of Exchange was to be simply the Bank of France transformed on the mutual principle.” Thus, it was a vision of reform—radical reform, to be sure—but not a vision of revolution.

The alternate institutions that fared better tended to be part of a broader support system for a specific community, such as the social agencies operated by early labor organizations in America for their members. Those organizations exemplified the class awareness; for example, the Knights of Labor refused membership only to bankers, lawyers, gamblers, and saloon-keepers, who were viewed as the bane of working people.

Legal Opposition. Two circumstances that invited a backlash from authorities were intersection and visibility.

Intersection: In 1848, Proudhon approached Louis Blanc, a minister in the French Provisional Government, for assistance in transforming the Bank of France into an Exchange Bank. Proudhon was unsuccessful. But because his bank was partially based on government approval, it floundered. Today, so-called alternative financial institutions apply for licenses or otherwise comply with regulations. In doing so, they either go out of business or  cease to be alternatives; they become part of the problem.

Visibility: When an alternative financial institution threatens the status quo, and is seen to do so, it is dismantled. Transparency is not its friend.

A case on point is the massive network of voluntary labor unions in 19th century North America, which provided millions of workers with everything from credit to life insurance. The voluntary labor unions were also hotbeds of political dissent. President Franklin D. Roosevelt all but eliminated them by establishing a monolithic Big Union that enjoyed government privileges through legislation such the Wagner Act (1935); the fact that modern unions were backed by Big Business should have been a red flag. An article entitled “The Great Lie of the Modern Union,” explained, “The modern union that arose…” was “the opposite of what it claimed to be. It did not voice workers’ rights. It silenced them.” The decline of voluntary labor unions meant their financial safety nets evaporated.

Cryptocurrency is not “new under the sun” in providing an alternative to government banking. It is not even new in providing a free-market one. But the dynamics of crypto are stunningly unique. The algorithms and blockchain are able to blow past three of the main pitfalls of previous alternatives—ideology, structure, and legal opposition.

Satoshi Nakamoto designed bitcoin and the blockchain to bypass a central banking system that served the status quo, not the individual. Given that the central banking system is not capitalistic but exists in communist societies, as well, the capitalist v. worker class analysis does not apply to crypto. Another form of class analysis fits perfectly.

Before discussing class analysis, however, it is necessary to define the word “class.” A class is a group of people or things with common characteristics. The grouping occurs because it is useful to whoever is defining the category. A researcher of financial habits might break his subjects into credit card users and non. A doctor studying drug addiction might split his patients into cocaine users and meth addicts. A classification can be defined by almost any shared characteristic: hair color, sexual orientation, preference in deodorant…

But if capitalists v. workers does not work well with crypto, what is the basis of crypto class analysis? It is the state v. society.

In his classic work, The State, the German sociologist Franz Oppenheimer spearheaded an analysis of these key terms.

Oppenheimer defined the state as “that summation of privileges and dominating positions which are brought into being by extra-economic power [force].” As well as the visible structure of politicians and bureaucrats, the state includes all agents (such as the military and law enforcement), affiliates (such as banks), and cronies (such as corporations and the mainstream media). Rothbard expounded on the concept. “I define the state as that institution which possesses one or both (almost always both) of the following properties: (1) it acquires its income by the physical coercion known as ‘taxation’; and (2) it asserts and usually obtains a coerced monopoly of the provision of defense service (police and courts) over a given territorial area.”

Oppenheimer defined society as “the totality of concepts of all purely natural relations and institutions between man and man.” Rothbard explained that a free society was “one where there is no legal possibility for coercive aggression against the person or property of an individual.” Society was the total of human interaction that occurred in the absence of institutionalized force.

Force and the threat of force are necessary to the state because it produces nothing. Its only source of “income” is the wealth it grabs from others, including through taxation, confiscation, fines, fees, tariffs, inflation, bribes… To exist, the state must steal. By contrast, society consists of voluntary exchanges that produce wealth, whether in terms of money, culture, family, spirituality, and other human values. An exchange occurs only when all parties to a transaction agree to its terms, which means all parties benefit.  occur. Rothbard highlighted the difference between state and society. “If I cease or refrain from purchasing Wheaties on the market, the Wheaties producers do not come after me with a gun or the threat of imprisonment to force me to purchase; if I fail to join the American Philosophical Association, the association may not force me to join or prevent me from giving up my membership. Only the state can do so; only the state can confiscate my property or put me in jail if I do not pay its tax tribute.”

Before crypto, even people who saw this class divide clearly were forced to use the state because so much of modern life was monopolized by it. Banking and the issuance of currency are fine examples. This essential realm of human interaction became a state monopoly. Little could be done about it; a bank account was almost a requirement of daily life, and it was extremely difficult to send money overseas without involving banks or other authorized institutions. No more. Crypto upends the state’s monopoly.

As with ideology, crypto is also able to answer the issues of structure and legal opposition that plagued prior financial alternatives to the state.