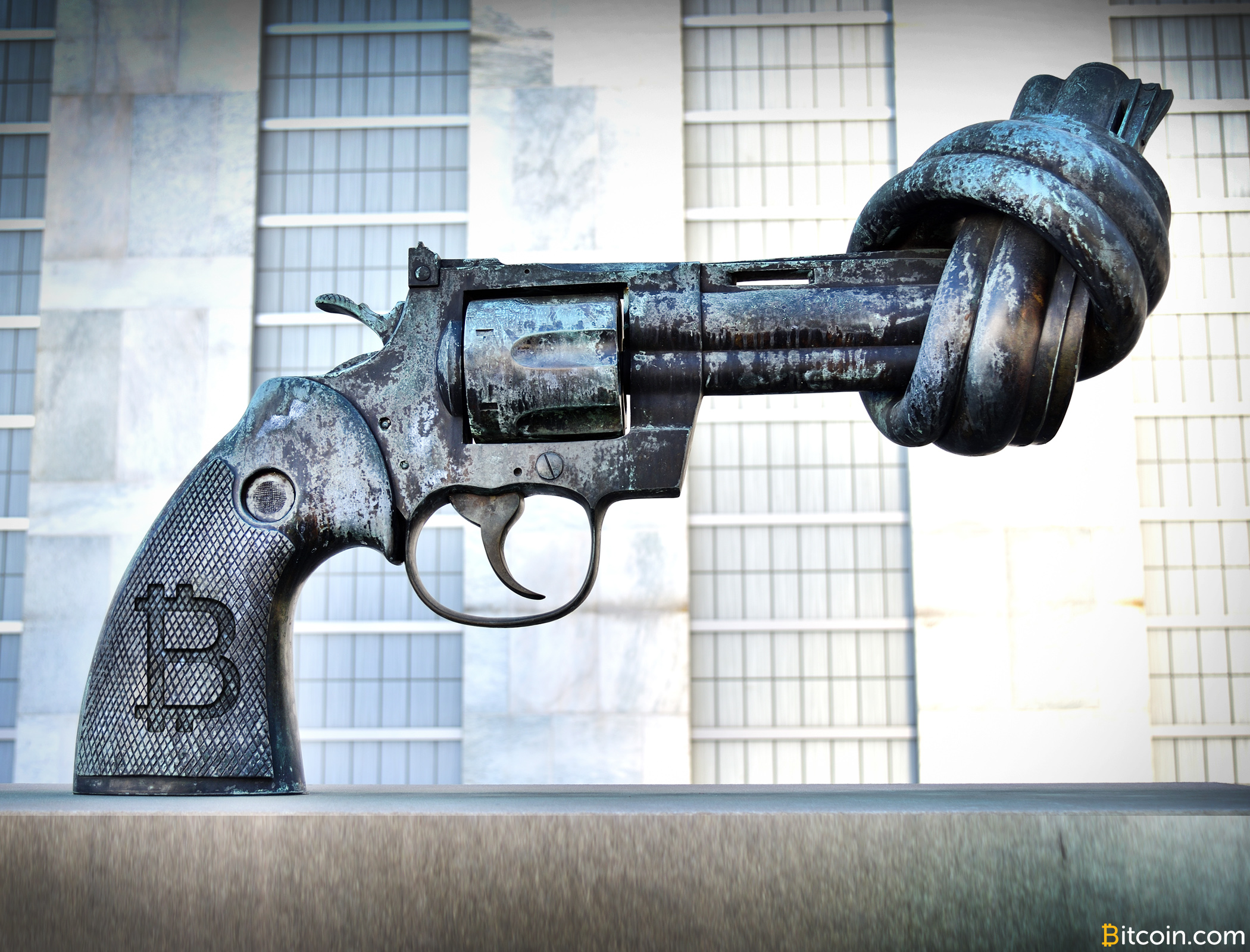 The Satoshi Revolution: A Revolution of Rising Expectations
Section 4: State Versus Society
Chapter 10, Part 1
The Key to the Crypto Revolution’s Success is Overlooked
by Wendy McElroy

Turning and turning in the widening gyre
The falcon cannot hear the falconer;
Things fall apart; the centre cannot hold;
Mere anarchy is loosed upon the world,
The blood-dimmed tide is loosed, and everywhere
The ceremony of innocence is drowned;
The best lack all conviction, while the worst
Are full of passionate intensity.

A political or cultural revolution is a fundamental and often sudden change in how society functions. There are several forms of revolution, including violent, nonviolent, technological, ideological, or issue-driven. Cryptocurrency is an ideological and a technological revolution. It is also trustless, which is why it will continue to succeed.

Those who view crypto as nothing more than an investment or a fiat substitute seem to delight in deriding and denying that crypto is either ideological or revolutionary. They demean or dismiss those who champion the political power of private money, contracts, and communication. To crypto enthusiasts, these characteristics of crypto do not constitute strategies for freedom; they are freedom, and not merely for individuals. The borderless flow of finance, business, and information opens up the world.

Enthusiasts laud many characteristics of the crypto revolution, including its nonviolence and efficiency. But the key to its success is overlooked. Crypto avoids the fatal flaw of most revolutions: relying upon trusted third parties known as “leaders” for success in achieving goals and following through on them. Just as an individual who relinquishes wealth to a central bank also relinquishes economic control, so, too, does an individual who surrenders his political power to representatives surrender control in that area. The leaders of a revolution act no more honorably with political power than central banks do with economic power. In short, revolutionary leaders embody the trusted third party problem-a choke point of corruption-that bitcoin was created to bypass, keeping power with individuals.

In his book The Bitcoin Standard, the economist Saifedean Ammous observed, “Bitcoin can be best understood as “distributed software that allows for transfer of value using a currency protected from unexpected inflation without relying on trusted third parties.” The crypto revolution can thus be best described as distributed software allowing for a private transfer of wealth , information, and power that is protected from the state by eliminating the latter’s  role as a trusted third party.” The pseudonymous, decentralized, peer-to-peer process is transformative. When the retention of individual power becomes sufficiently widespread, then it becomes a leaderless revolution—a trustless revolution–with no need to depend upon commanders, who never grab power out of selflessness. Users depend, instead, upon pursuing their own self-interests.

Expanding the Perception of Revolution

The stereotypical revolution has individuals rising en masse to reclaim control of political and economic power from elite and oppressive rulers. Such revolutions are “popular” in the sense that they start with a groundswell of popular resistance against the status quo.  That’s how many begin. Then, most of them go horribly wrong. Some have ushered in far greater oppression than was swept away.

The French Revolution is an example. Soul-crushing taxes and a rigid class structure fed the uprising. The Bolshevik Revolution is also an example.  The catastrophic death toll and starvation caused by World War I, more than a commitment to Marxism, was what led Russians to revolt. The trusted third parties called rulers had pushed society too far, and they lost all trust.

The uprisings had long fuses but sudden explosions. Under the banner “Liberté, Égalité, Fraternité” (Liberty, Equality, Brotherhood), the new French officials conducted mass arrests and executions that often targeted average people who violated economic laws, such as by smuggling. The Revolution brought power to blood-thirsty autocrats like Robespierre and St. Just. Under the slogan ”Peace, Land, Bread!,” Russian officials instituted a totalitarian regime of elite power, rather than the workers’ paradise they promised. The Revolution gave rise to “democratic dictators” like Lenin and, eventually, Stalin. This is the common path of many revolutions.

Why? As trusted third parties, revolutionaries become a nouveau upper class who adopt the same basic power structure as before: absolute government that rules through claims of revolutionary legitimacy, intimidation, and raw force. The faces and ideologies change but not the centralization of power, the brutality toward dissidents, and the stark indifference to the populace.  Call the new regime socialist, Islamic, Marxist, democratic, or fill-in-the-blank–they have one thing in common: The rulers impose ideology and policy for their own advantage. That can be trusted.

Why will the anti-state ideology and revolution of crypto produce different results?

Its decentralization and peer-to-peer structure ensure that power is not vested in trusted leaders; it remains with individuals who pursue self-interest, whether self-interest is defined politically, financially, or otherwise. The crypto revolution is the cumulative weight of users who destroy the state’s monopoly, not through violence but by simply not using the system. This both shatters the monopoly and renders it irrelevant. And it cannot arise again. The state ceases to be a trusted third party led by the likes of Robespierre, Lenin, Pinochet, Mao, or Castro. Attempts to reconstruct the state by killing dissenters are doomed because there are no leaders to assassinate, imprison, or corrupt.

Individual freedom and revolution are yet other ways that crypto obviates the trusted third party problem.

The Backlash Against Idealism and Revolution

Those who argue for the status quo of state-controlled finance could be called counter-revolutionaries. Their motives matter. Some newcomers to crypto may be ignorant of bitcoin’s history and, so, shrug off claims that it was born in anarchism. Education may be an appropriate strategy for them. Others may under-estimate the devastation that the state monopoly of money wreaks upon their own well-being. Again, education and reasoned arguments may work best. And, then, there are those who believe in or are otherwise vested in state authority. They regard those who flout it as criminals or at least criminally naïve enough to be dangerous to society. We need to oppose true believers in the state because they actively advocate the imposition of law on peaceful behavior; they want to point guns at crypto users who do not conform to their ideology. They want to return crypto to the politics of trusted third parties.

The derision will keep pouring out because counter-revolutionaries are correct on one point; idealists do obstruct the mainstreaming of crypto—that is, if the “mainstream” is defined as state sanction and adoption by central banks. In a real sense, the scorn is a lull before the storm.

An Irrepressible Digital Freedom, But How to Weather the Storm?

Crypto needs to return to its roots and acquire a fresh realization of its political strengths.

In the 80s, the cypherpunks used cryptography and other privacy technology to subvert government in areas such as censorship and taxation. The punks’ strategy was rooted in David Chaum’s development of cryptographic anonymity and pseudonymity as described in his 1985 paper, “Security without Identification: Transaction Systems to Make Big Brother Obsolete” [.pdf]. Somewhat later, the cryptoanarchists began to avoid the state and ensure freedom by using cryptography and other privacy technology. Timothy May captured the essence of digital anarchism in his 1988 “Crypto Anarchist Manifesto.” May wrote, ”Computer technology is on the verge of providing the ability for individuals and groups to communicate and interact with each other in a totally anonymous manner…These developments will alter completely the nature of government regulation, the ability to tax and control economic interactions, the ability to keep information secret, and will even alter the nature of trust and reputation.”

But the power of the crypto revolution does not reside in its roots alone. It draws from the clarity of its definition of freedom, which its protocol executes. Moreover, its revolutionary strengths extend far beyond the trusted third parties known as leaders. Which additional characteristics ensure that cryptocurrency will be revolution unlike anything the world has seen?